I am a proud Gunditjmara and Tiwi Islander young woman. Living and working on Wurundjeri country in Melbourne. I have just turned 20 years old, I graduated Ivanhoe Girls Grammar School in 2018 and since then I have worked in State and Local Government. 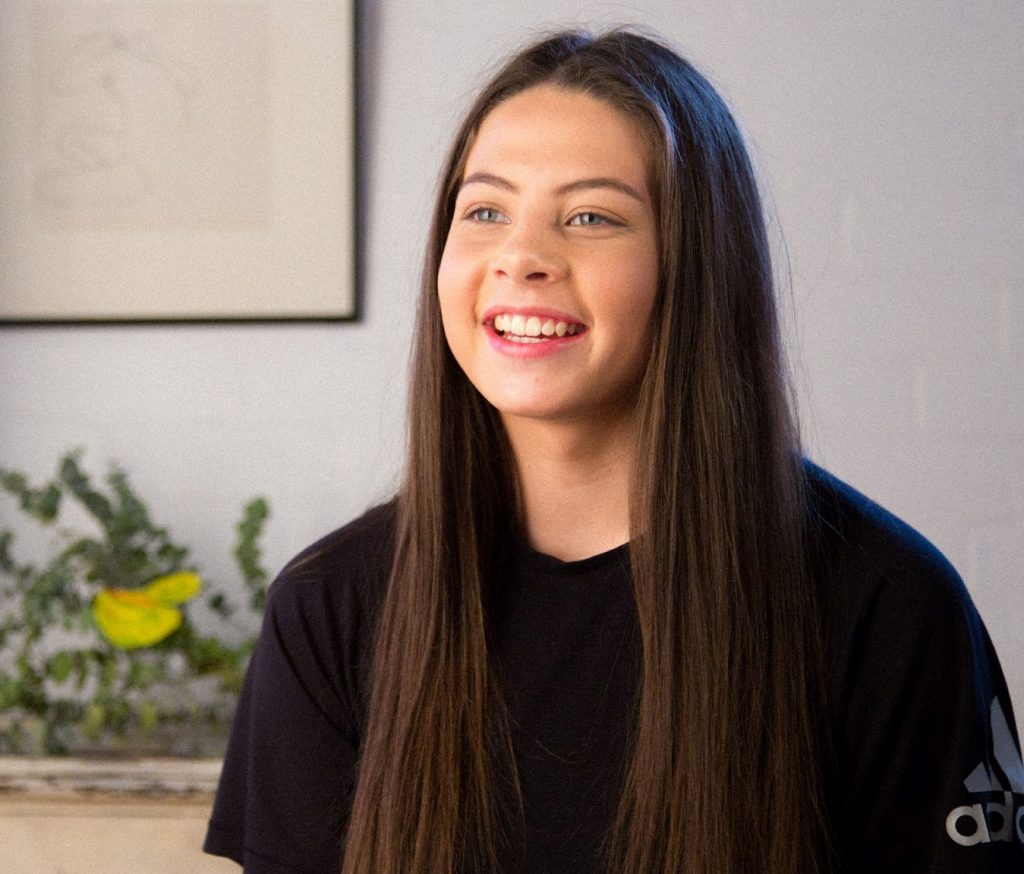 In June 2020, while I was stuck at home due to COVID-19, I decided to create my own small business now known as Sweet Water Art. My small business is a printing company and I focus on printing stickers, cards and bookmarks, I also do canvas, digital art and commissioned pieces in my free time. I have always had a love for art so I thought why not take it a step further and make a career out of it. I am a young woman with a small business who is bursting with big ideas and dreams that I am working very hard every day to achieve. My family have always encouraged me to dream big, work hard and have fun doing it.

My biggest obstacle in my life turned into my biggest achievement in my life, I was diagnosed with severe Scoliosis in 2015, I needed urgent surgery as my spine was curving at an alarming rate. I had to have surgery to straighten my spine and place two titanium rods and 17 screws onto my spine to straighten my back. (My family call me Titanium Warrior)

I was well along the journey to making it to the Women’s AFL level, that was my dream and the Scoliosis and operation tore that dream apart as I’m never allowed to play football again, it’s just too dangerous to my spine. After a lot of physical and mental healing I shifted my thinking and created new dreams that focused on art and boxing to keep fit.

My second biggest achievement would be getting selected to be the first ever Valedictorian for my school and being able to speak and represent my whole year level at the end of year 12. I was selected from over 110 students in the year level and addressed over 300 people at the Year 12 Valedictory.

Now I always look forward and I take on any opportunity that is thrown at me so I can experience as much as I can in my lifetime. Thank you

Wanting to work with an artist?

In 2020 Council declared its support for the global Black Lives Matter (BLM) movement. A motion (prepared in consultation with Yarra’s Yana Ngargna advisory group) was passed unanimously by all Councillors without debate. A number of actions were generated from this decision; one of which was for Council to commission a large-scale mural that aligned with the movement.

A new, major public artwork by emerging artist Ky-ya Nicholson-Ward, a proud Wurundjeri, Dja Dja Wurrung, Nguarai Illam-Wurrung, German and Irish woman, has been installed on a Council-owned building in Peel Street Park, Collingwood. The artwork (selected by Council’s Yana Ngargna, Black Lives Matter Working Group) identifies the cultural importance of the local area to the Wurundjeri Woi Wurrung people as the Traditional Owners. With a strong focus on Aboriginal identity the mural outlines the local context of the Black Lives Matter movement, which is connected to racism, policing of Aboriginal and Torres Strait Islander peoples and associated deaths in custody. The artwork acknowledges the ongoing challenges faced by Aboriginal community members and their struggle to survive white systems, policies and institutions.

The instantly recognisable raised fist that Ky-ya has placed front and centre of the artwork, immediately aligns it with the BLM movement. Ky-ya describes her artwork and the symbols she has depicted as follows:

“The fist references the Black Lives Matter movement and also represents the strength of Indigenous peoples all over the world and symbolises solidarity and justice for everyone affected by systematic racism. Bunjil (wedge-tailed eagle) is flying high on the building, he is the creator spirit for Wurundjeri people, he looks over us and protects us. Bunjil represents healing and power to our people. The blue circles and lines represent revival and waterways; in particular, they depict the Birrarung (Yarra River), which is very significant for the Wurundjeri people. Our people are known as the Manna Gum people, the leaves in the artwork highlight Wurundjeri people and their Country. These leaves also represent the cleansing of negative spirits. The Manna Gum leaf is also an important symbolic offering in our traditional Welcome to Country ceremony. Leaves are offered to visitors as they are granted safe passage through our land; they are made welcome to everything from the tops of the trees to the roots of the earth. We ask that they take care of the land, plants and animals and to respect the protocols and rules of the Traditional Owners whilst on our Country.”

Ky-ya’s mural tells the story of Aboriginal resilience, strength and self-determination; and will support the process of healing. It is a celebration of the local Aboriginal and Torres Strait Islander community; the significant Aboriginal history of Fitzroy, Collingwood and surrounds; and community’s continuing cultural connection to the area. 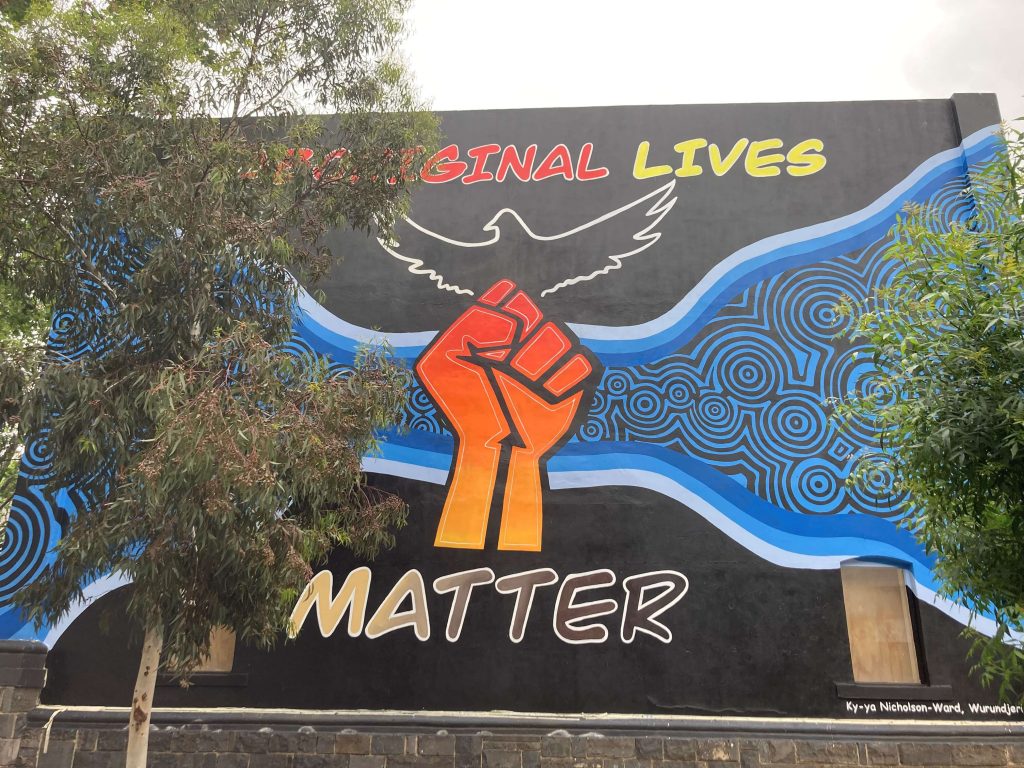 Importantly, this artwork provides a platform to educate a broader audience about the local context of the Black Lives Matter movement and Aboriginal deaths in custody. The mural will activate this site, enliven the area, promote inclusion, incite conversation and contribute to the creative capital of this locale; as well as fostering a welcoming environment for Aboriginal and non-Aboriginal communities.

Ky-ya Nicholson-Ward is a Wurundjeri, Dja Dja Wurrung, Nguarai Illam-Wurrung, German and Irish woman. Following in the footsteps of her mother—well-known artist Mandy Nicholson—Ky-ya already has an impressive list of achievements. She designed the 2020 Indigenous Round Melbourne Storm jersey as well as the Suncorp Super Netball’s Indigenous Round dress for Melbourne Vixens. In a collaboration with her mother, she created an artwork for the 2020 National Reconciliation Week for Melbourne Cricket Club on the turf at MCG.

In 2021, Ky-ya produced all the artwork for Yarra City Council’s Black Lives Matter campaign (with support from Gunditjamara & Tiwi Islander artist, Kiewa Austin-Rioli) including large-scale posters, tee-shirts and a mural across all four exterior walls of a building in Peel Street Park, Collingwood.

Check out the mural at Peel Street Park in Collingwood.

Wanting to work with an artist?

Keep up to date on our news